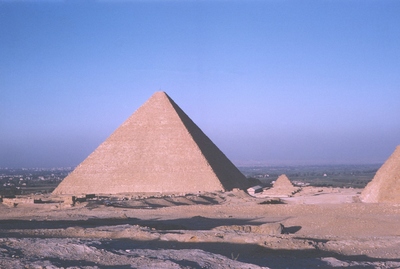 "The Great Pyramid of Giza represents the culminative effort of the pyramid builders. Not only is it the largest monument of its kind ever constructed, but for excellence of workmanship, accuracy of planning, and beauty of proportion, it remains the chief of the Seven Wonders of the World" (Fakhry, 99). It was built by Khufu, the Egyptian pharaoh of the Fourth Dynasty (2789-2716 B.C.). Khufu is considered to be have been "perhaps the most powerful pharaoh ever to rule Egypt, the accomplishment of building the Great Pyramid being the testament to the might and discipline of a grand civilization at its zenith. This impressive monument was composed of 2½ million blocks of stone, each weighing an average of 2½ tons, and comprising congolomerately over 6 million tons; it encompassed an area of 13½ acres in a 3,000' base perimeter, and displaced a volume of 94 million cubic feet of solid masonry" (Lepre, 61-2). (Sources: Fakhry, Ahmed. The Pyramids. Chicago and London: The University of Chicago Press, 1969; Lepre, J. P. The Egyptian Pyramids: A Comprehensive, Illustrated Reference. Jefferson, NC: McFarland, 1990.)