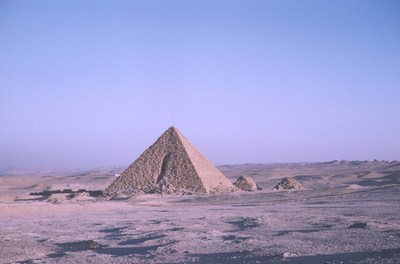 View of the Third Pyramid at Giza, also called the Pyramid of Menkure (Khafre's son). "Menkure's pyramid is the southernomst of the Giza group. Its smaller size was offset by the splendid appearance of the granite casing which covered at least the lowest sixteen courses" (Fakhry, 138-9). "Menkure's pyramid was built on a slope of the plateau, and the site was leveled with limestone masonry ... Much of its original granite casing remains in place, but, except for the area forming the rear of the Mortuary Temple sanctuary and a few blocks around the entrance, all these blocks were left in the rough—a feature which would indicate that the casing blocks were sent from the quarry rough-hewn and dressed only after being set in place ... As is the case with the other Giza pyramids, the Third Pyramid has lost most of its white limestone surface, and the structure itself has suffered damage, especially on the northern side ... The building measures about 108.5 meters square, and originally stood 66.5 metres high; the angle is 51° ..." (Fakhry, 146). (Source: Fakhry, Ahmed. The Pyramids. Chicago and London: The University of Chicago Press, 1969.)