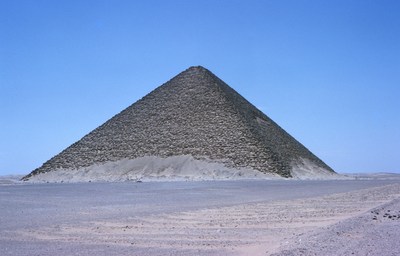 "The oldest true pyramid is the Northern Pyramid at Dahshur, a short distance from the Bent Pyramid. Although earlier in date than the Great Pyramid it is not much smaller in size, the base measuring 220 metres and the height 105. The sides have a slope with a horizontal of 43° 36', which is nearly equal to the slope of the upper part of the Bent Pyramid (the base of the Cheops Pyramid measures 232 metres, and its side has a slope of 51° 51' 14.3" to the horizontal). The slope is much less than most other pyramids, and gives it a more or less flattened appearance ... The pyramid has no inscriptions, and it was a mystery to find out which pharaoh was its builder. Several small clues made archaeologists come to the conclusion that its builder was Snefru [see previous slide]. Snefru's name was also found written on a casing block at the north eastern corner of the pyramid. However, inscriptions of this order are sometimes inaccurate. In 1905 Ludwig Borchardt saw another such inscription at the edge of the cultivation dating from the reign of Pepi I of the 6th Dynasty. It was a decree from Pepi I exempting priests of the 'two pyramids of Snefru' from some taxes. No sarcophagi or remains of a mummy were found in any of Snefru's pyramids." (Source: Farid S. Atiya, Ancient Egypt (Giza, Egypt: Farid Atiya Press, 2006), 127.)