B02.076 Mosque of Shaykh Lutfallah 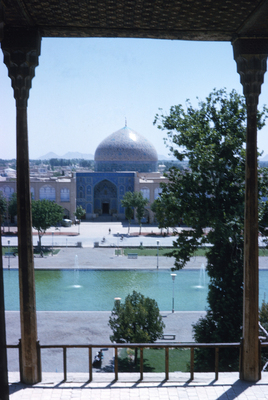 The Mosque of Shaykh Lutfallah, as seen through the slender vertical supports of the balcony of the 'Ali Qapu (an "audience hall to an official tribune" (190), originally begun by the Safavid ruler 'Abbas and situated opposite the Lutfallah mosque in the maidan). The mosque sits on the eastern side of the maidan (see description of B02.051 for an account of the maidan), and "is small but exquisite. The building is unique among Safavid mosques: it comprises a single domed room (19 meters on a side) surrounded by service areas and resting on another room of almost the same dimensions, covered with low vaults resting on four octagonal piers. The building lacks such standard accoutrements of mosques as a court, side galleries, iwans, or minarets; its form fits better within the long-established Iranian tradition of large domed mausoleums ... As in the Shah Mosque, the portal is aligned with the maidan and the interior aligned with the direction of Mecca. To reach the prayer hall, one must pass through the portal iwan, ablaze with glittering tile, through a gloomy corridor around two sides of the sanctuary so as to enter it opposite the mihrab" (185). Another interesting fact about this building is the ambiguity regarding its function. "The inscriptions identify the building as a mosque (masjid), but its function remains a mystery, although it is often considered to have been a royal chapel" (188). It is named "after Shaykh Lutfallah Maysi al-'Amili, the distinguished scholar and teacher who came to Isfahan at 'Abbas's request and took up residence on the site," even though it was named after him only after his death, "and he does not seem to have played any part in its construction" (188). -MA (Source: Blair, Sheila S., and Jonathan M. Bloom. The Art and Architecture of Islam: 1250–1800. New Haven and London: Yale University Press, 1994.)