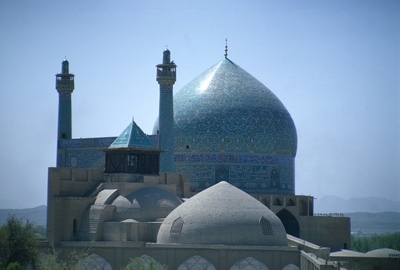 The Shah Mosque, along with the Shaykh Lutfallah Mosque and the 'Ali Qapu, is situated on the south side of what is called the "New maidan." The New maidan (or simply the maidan, as it shall be referred to from here on — it is called new only because there was an "old" maidan that was situated next to the Friday Mosque of Esfahan) is an elongated rectangle that "was conceived, designed, and constructed between 1590 and 1595 primarily for state ceremonies and sports," and eventually "redeveloped for commercial purposes, with two stories of shops around the perimeter" (185). The maidan was constructed as part of "the urban program carried out by 'Abbas [Safavid emperor] in his new capital," and became one of the most important and frequented parts of Isfahan (183). The Shah Mosque was begun in 1611, but its construction continued into the 1630s. "The building was endowed with agricultural and commercial properties in and around the city, and both the building and its generous endowment were another aspect of 'Abbas's plan to shift the city's commercial and religious center away from the area near the Friday mosque" (188). This image shows the part of the mosque lying behind its entrance portal (see B02.050). While the entrance portal of the mosque is aligned with the maidan, "the remainder of the building (100 by 300 meters) is turned 45° to face Mecca. The mosque follows the typical Iranian plan of a central court (70 meters on a side) surrounded by arcades, with an iwan in the middle of each of the four sides ... and a domed sanctuary beyond the iwan on the qibla side; but the plan is noteworthy in several ways ... The domed sanctuary is flanked by rectangular chambers, which are covered by eight domes and serve as winter prayer halls. These halls in turn lead to rectangular courts surrounded by arcades, which serve as madrasas. Paired minarets soar from both entrance portal and sanctuary iwan, although the call to prayer was given from an edicule (Pers. guldasta) over the west iwan. Another arcaded court containing latrines opens off the vestibule via a domed quincunx. The whole plan is marked by an extraordinary concern for symmetry, made possible by the unusual availability of virtually unlimited space" (188-9). -MA (Source: Blair, Sheila S., and Jonathan M. Bloom. The Art and Architecture of Islam: 1250–1800. New Haven and London: Yale University Press, 1994.)