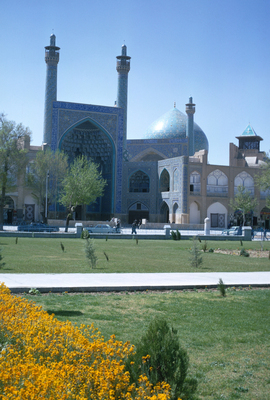 The next fifty images in the collection exhibit some of the finest architectural creations of the Safavid empire (1501-1722), one of the three main empires of the Early Modern Islamicate world. Before introducing the monument in this image, i.e. the Masjid-e-Shah, I quote a few lines on the general characteristics of Safavid architecture by Sheila Blair and Jonathan Bloom: "The buildings erected under the rule of the Safavid dynasty are perhaps the most alluring and attractive in all Iranian architecture. Their enveloping glittering web of glazed tile, soaring portals, bulbous domes, and slender minarets epitomize for many the essential qualities of Persian architecture. In part this is a matter of survival, for a large and impressive ensemble of buildings is easily accessible in Isfahan, the former Saljuq capital that became the third capital of the dynasty; but in part the attractiveness of Safavid architecture is due to its open and easy design, with simple compositions based on addition and symmetry. Safavid architecture shows little, if any, structural or formal innovation, for architects needed to build and decorate vast structures in the shortest time, and so colorful tile revetments often conceal structural banality. Its greatest strength lies in the planning and execution of large urban ensembles, which integrate a variety of commercial, religious, and political functions in harmonious compositions. Just as Safavid painters began to be interested in the history of their art, Safavid architects showed a distinct consciousness of their architectural heritage, be it the Timurid tradition of dynastic architecture in Khurasan or the local tradition of architecture in Isfahan and its region" (183). This image shows the entrance portal of the Shah Mosque. For a more detailed description of the mosque, see next slide. -MA (Source: Blair, Sheila S., and Jonathan M. Bloom. The Art and Architecture of Islam: 1250–1800. New Haven and London: Yale University Press, 1994.)