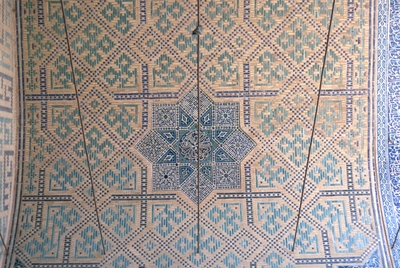 View from beneath the vault of the iwan façade of the Muzaffarid madrasa (also visible in B02.043). The vault has been lavishly decorated with an intricate network of geometric patterns centred around three polygonal star shapes. Two of these are 16-sided stars which in turn contain regular 8/3 star polygons, one of which is visible here. This vault uses what are called "hazarbaf" tiles, which are basically a variation of "banna'i" brickwork. The latter is a form of architectural decoration or technique in which glazed tiles alternate with plain bricks to form geometric patterns that cover surfaces. If the brickwork is in relief, then it is called "hazarbaf." For more detail on the Muzaffarid madrasa, see B02.043. -MA