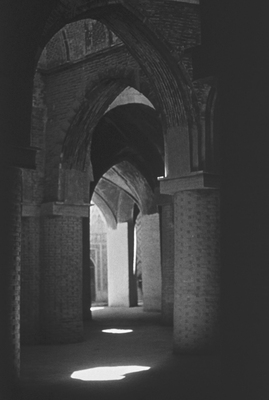 Vaulted bays in the southwestern hypostyle area of the mosque. Pointed arches and circular pillars are a common feature of this area. "The covered areas extending between the four iwans are hypostyle halls comprising a series of small domes, mostly built in the twelfth century. The piers of these halls differ in shape and thickness as structural supports were added to them over time. There is variety of open and closed vaults of different forms and arrangements. The open vaults create lit spaces, in contrast to dark ones; closed brick vaults present a structural innovation, and in many instances include rib vaults similar to those in the Great Mosque of Cordoba. The different arrangement of the brick patterns, some hexagonal, others octagonal or decagonal, indicate not only structural variation but also embodied meaning: but to some historians (i.e., Sayed Husein Nasr), these patterns are associated with Sufi mysticism through their mathematical shapes." (Source: "Masjid-i Jami'" Archnet. Accessed April 07, 2017. https://archnet.org/sites/1621.)