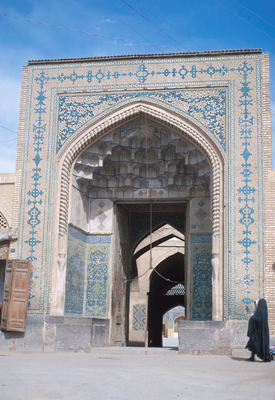 View of the southeast entrance portal of the Masjid-e-Jameh or Friday Mosque of Esfahan. According to Oleg Grabar, the Friday Mosque is the "most remarkable and celebrated" of the group of mosques built in Iran in the "period of the Great Saljuqs," who chose Esfahan as their capital. In his commentary on the building, Grabar writes that the Friday Mosque "is extremely complex and, in spite of several studies and partially completed and published excavations, still far from being clearly understood. Like Chartres, with which it has often been compared, it is unique, and thus cannot be adduced to define a period." Of the mosque's plan, he writes: "It is a large, irregular aggregation of buildings whose northeast—southwest axis is 150 metres, with 476 separate vaults, mostly domes. The core is the rectangular courtyard of the tenth-century hypostyle mosque discussed earlier [Grabar says in an earlier chapter that "a large (about 140 by 90 metres) hypostyle mosque was built, possibly in the ninth century" on the site of the Friday Mosque today] into which were introduced four iwans, of which two are almost square halls ending in a blank wall." These four iwans (an iwan is "a vaulted hall, walled on three sides, with one end entirely open") are part of the most beautiful and richly decorated parts of the mosque. -MA (Source: Oleg Grabar, Islamic Art and Architecture 650-1250, (New Haven and London: Yale University Press, 2001), 140.)