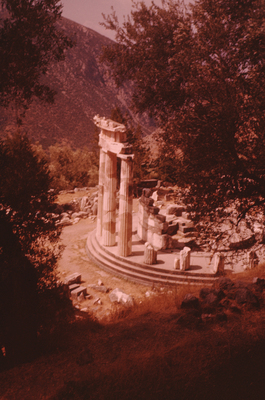 The famous Tholos of the sanctuary of Athena Pronaia at Delphi. It was constructed sometime in the fourth century B.C., and has a circular plan with originally twenty outer Doric columns and ten Corinthian columns on the inner circle. The purpose of the building is not exactly clear. The following is Emily VerMeulen's (from Coastal Carolina University) commentary on the building: "The tholos at the sanctuary of Athena Pronaia at Delphi was built sometime between 400-375 BCE and was probably designed by Theodorus of Phocaea, who is said to have written a treatise devoted to the temple structure (Lawrence 1957, 184). The structure was constructed primarily of marble which was brought from Attica and is 13.5 meters in diameter. In recent years, the temple has been partially reconstructed; three columns have been restored along with partial cornices, pieces of the guttering, metopes, and triglyphs. Featured on the exterior friezes were images of the battle between the Amazons and the Centaurs. The gutter of the exterior Doric entablature was ornamented with lion head spouts. The blocks of the tholos are joined together carefully, and the joints coincide with the central points of the triglyphs and metopes. The blocks were stippled except for polished bands at the margins. Also done in the Athenian Propylaea, this method emphasizes the joints more than other smooth marble architecture of Athens." (Source: VerMeulen, Emily. "DELPHI: Athenian Treasury." DELPHI: Athenian Treasury. N.p., n.d. Web. 24 Feb. 2017. http://www.coastal.edu/intranet/ashes2art/delphi2/sanctuary/athenian_treasury.html)