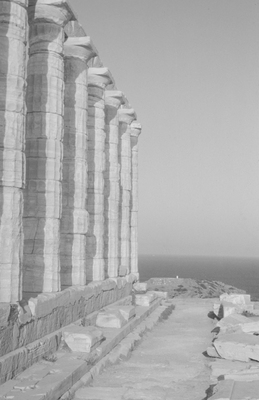 Doric colonnade of the Temple of Poseidon at Sounion. The following lines are from Mark Cartwright's entry on the monument in the online Ancient History Encyclopedia: "Sounion (or Sunium) was an important ancient Greek religious sanctuary sacred to the gods Poseidon and Athena. Spectacularly located on a promontory in southern Attica, the site is dominated by the temple of Poseidon perched on the cliff edge, seventy metres above the sea ... The second and surviving temple of Poseidon was built upon the poros base of its predecessor using the locally pure white marble from Agrileza. The temple is peripteral, that is columns were on all sides - 6 on the façades and 13 on the long sides, each 6.12 metres tall. The temple is also amphiprostyle as the outer rows of columns are of the same order as the inner cella columns. The columns carry only 16 flutes rather than the usual 20, perhaps an attempt by the architect to reduce weathering in such an exposed site. Within the temple stood a statue of Poseidon (which has not survived) and the site’s votive treasures would have been kept in the inner opisthodomos. The outer architrave (and probably pediments too) did not carry any architectural sculpture but the inner pronaos frieze did carry sculpture which depicted scenes from mythology such as a battle with centaurs." Source: Cartwright, Mark. "Sounion." Ancient History Encyclopedia. N.p., 23 Feb. 2013. Web. 20 Feb. 2017.