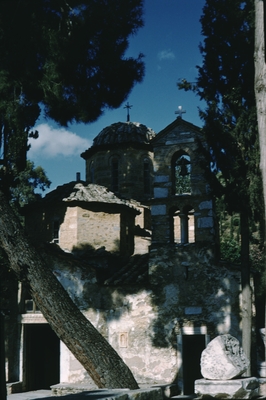 The Kaisariani Monastery near Athens. The following is the entry on the monastery in the Oxford Dictionary of Byzantium: "(Καισαριανή), monastery on Mt. Hymettos near Athens. In antiquity probably a sanctuary of Aphrodite, the site was converted to Christian use in the 5th or 6th C. The monastery must date to ca.1100, when the surviving church was built; it is mentioned in the correspondence of Pope Innocent III (T. Neroutsos, DIEE 3 [1889] 103–05) but apparently remained in Greek hands after the Fourth Crusade since in 1210 Michael Choniates addressed a letter to its Orthodox hegoumenos (Mich.Akom. 2:311). The katholikon is a cross-in-square with half-hexagonal apses; south of the church is a bath, apparently contemporary with the katholikon but later turned into an oil press. The narthex and frescoes in the katholikon, along with the other buildings of the monastery, are post-Byz. To the west are the remains of a large early Christian basilica with semicircular apses, over which a smaller domed church was built, apparently in the 10th–11th C. To the south of this are the ruins of a single-aisled church, probably built during the Frankish period." (Source: Kazhdan, Alexander P. The Oxford dictionary of Byzantium. Oxford: Oxford U Press., 2005. Oxford Reference. 2005. Web. 20 Feb. 2017.)