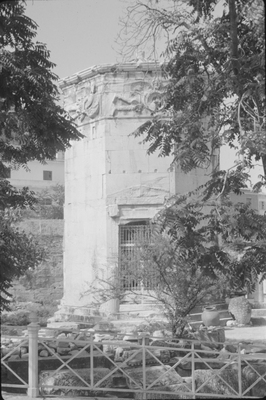 The Tower of the Winds, situated on the slopes of the Acropolis hill. It has been referred to as "the world's first weather station" as it features lines of a sundial and was used in its heyday to tell the time, apparently even at night, even though it has not become clear how that was possible. The structure, "credited to the architect and astronomer Andronikos of Cyrrhus," is 14 meters tall, octagonal in plan and made of marble. On top of its entirely preserved roof sits a Corinthian capital which, it has been suggested, "served as the base of a bronze wind vane in the form of sea god Triton." Beneath the roof is a marvelous frieze exhibiting "eight Anemoi - wind gods of Greek mythology - each facing a different direction." Further interesting facts about the tower come from later in its history: " ... [The tower] also served as a church and restorers have discovered fragments of frescoes with Christian subject matter, including an angel and a saint on horseback ... Late in the city's period under Ottoman rule, the monument was also used as a place of worship by Sufi Muslim Whirling Dervishes. A mihrab niche was carved in the direction of Mecca and Ottoman inscriptions decorate its walls." -MA (Source: Tagaris, Karolina, and Phoebe Fronista. "Ancient Greece's restored Tower of Winds keeps its secrets." Reuters. Thomson Reuters, 25 Aug. 2016. Web. 17 Feb. 2017.)