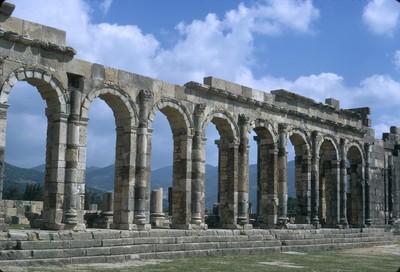 Built around 217 AD in the former Roman province of Mauritania, the Volubilis Basilica runs parallel to the forum and is among the ruins of stately temples and Roman baths. The basilica contains two semi-circular apses on the east and west ends with quadrilateral rooms flanking either side. These rooms may have been small municipal offices. Elegant arcades and architraves supported a second story around a central bay. Roman basilicas were designed to be spacious and multifunctional as they served as the community’s public court, town hall, and office space. -CK