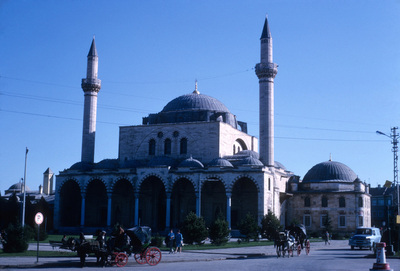 The Selimiye Camii at Konya. Its architect, Mimar Sinan, was the chief Ottoman architect from the era of Suleiman to Murad II, and other great buildings such as the Selimiye Mosque in Edirne and Suleyman Mosque in Istanbul I are also his work. Towards the end of his career (between 1566 and 1574) he erected the Selimiye in Konya near the convent of the whirling dervishes. The Selimiye is quite traditional compared to his previous works and features a central dome on pendentives; the interior squinches feature lavish arabesque mosaics and the exterior squinches are adorned with stalactite muqarnas. The square plan has two characteristic side-aisles leading to a single apse that contains the mihrab. The Portico lies behind seven elegent arches. -CK | Stierlin, Henri, and Anne Stierlin. Turkey, from the Selçuks to the Ottomans. Köln: Taschen, 1998. Print. | "Mimar Sinan." Wikipedia. Wikimedia Foundation, n.d. Web. 19 Sept. 2016.