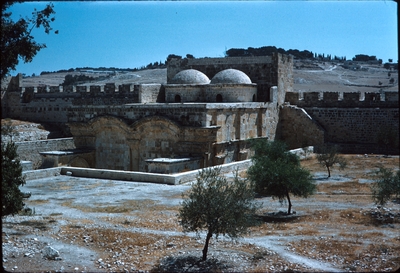 01- A view of the rear (western side) of the Bab al-Zahabi or the Golden Gate seen from inside the Haram. This is one of largest gates of the Haram. Its history is much contested, with estimates of its origins ranging from Herodian to Umayyad times. It is generally accepted now that the gate’s construction dates from the Umayyad period, though it was built on the site of a much older gate. The Golden Gate is also of religious significance: in Judaic tradition it is the gate through which the Messiah will enter at the end of times, and so too for the Muslims. Christians believe it is the gate through which Christ entered Jerusalem on the Sunday before his Crucifixion (Palm Sunday). The gate has been sealed for a long time, so that no extant accounts mention it ever being open.