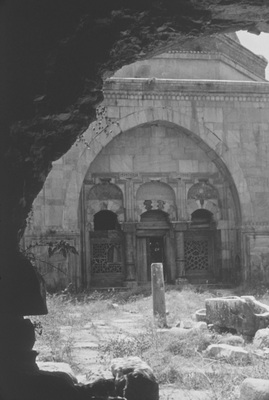 The iwan-portal that forms the entrance to the Ilyas Bey Mosque, as seen from within its courtyard. It consists primarily of an arcade divided into three flat-top (Bursa) arches, which is supported by two marble columns. Of the three arches, the wider, central one houses the entrance, while the other two contain marble balustrades and serve as windows. The tympana of the latter two arches are decorated with floral and geometric motifs. The Ilyas Bey Mosque too, like the Isa Bey Mosque (see B41.059-063), has undergone considerable renovation. It was the center of a hugely successful renovation and conservation project which won it the European Union Prize for Cultural Heritage in 2012. (See also B41.064.) -MA (Source: Şakir Çakmak "Ilyas Bey Complex" in Discover Islamic Art, Museum With No Frontiers, 2017. 2017. http://www.discoverislamicart.org/database_item.php?id=monuments;ISL;tr;Mon01;10;en)