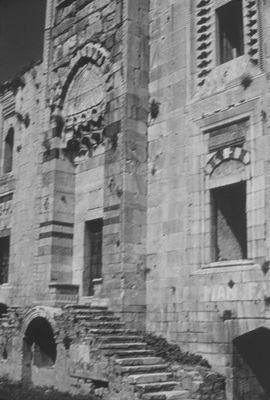 "The monumental western façade" of the Isa Bey Mosque, "constructed of stone brick and brick faced with marble. It is enlivened with windows whose frames are delicately carved with muqarnas, joggled voussoirs, and inscriptions. Two flights of steps lead toa portal which projects from the wall surface and is crowned with a muqarnas hood. The surface above is inlaid with black and white marble in an intricate knot pattern, a technique also used on the windows of the facade and around the mihrab (restored)" (Blair and Bloom, 135). Note that the mosque has undergone significant repair and renovation, and the facade in this image, although structurally the same, appears far less damaged today. -MA (Source: Blair, Sheila S., and Jonathan M. Bloom. The Art and Architecture of Islam: 1250–1800. New Haven and London: Yale University Press, 1994.)