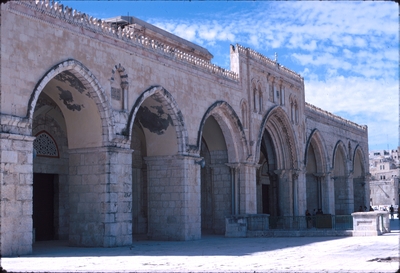 050- The façade of the mosque of al-Aqsa, “the farthest mosque,” located on the south of the Dome of the Rock on the Haram al-Sharif or the Noble Sanctuary. The south façade of the Dome of the Rock faces the main entrance to the Aqsa Mosque. The original construction of the mosque may go as far back as the time of the second caliph of Islam Umar. An Ummayad hypostyle mosque was completed by the time of the caliph al-Walid I (668-715). A destructive earthquake saw major reconstructions during Abbasid times. Another earthquake in 1033 saw a major rebuilding under the Fatimid al-Zahir (1021-1036) and completed under al-Mustansir (1036-1094) in 1065 [Oleg Grabar, Jerusalem: Constructing the Study of Islamic Art Vol. IV, p. 141]. The present building is mostly from this Fatimid construction, though the subsequent Islamic rulers such as the Ayyubids, Mamluks and the Ottomans each contributed with their repairs, restorations, and constructions.