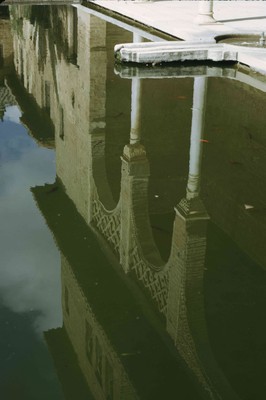 229- The Partal palace’s five-arched gallery reflected in the pool of water in front of it. The columns, though round today, were originally square, and were replaced with round ones in the 20th century. The word ‘Partal’ itself is of disputed origin. It is comprised of a five-arched gateway which overlooks pools of water. The Partal palace built by Muhammad III is the oldest surviving palace at the Alhambra. It is located to the east of the Court of the Lions. The box-hedges and the ivy of Partal’s gardens are all anachronistic.