B49.185 Alhambra from Generalife 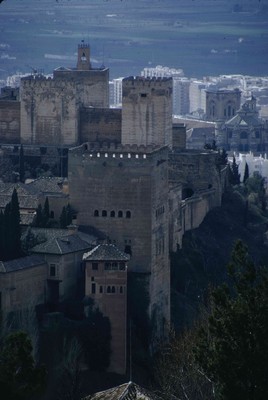 185- Walls of the Alhambra palace complex in Granada, Spain. The Alhambra is one of the most fantasized monuments of Islamic Architecture, captivating the imagination of a vast number of writers and artists, including Washington Irving and the French author Chateaubriand, to name just a couple. Indeed, some parts of the Alhambra, such as the Court of the Lions, are commonly written about examples of the most beautiful architecture in the world. The palace-complex as it stands today was built mostly in the fourteenth and fifteenth centuries under the Nasrid dynasty (1238-1492), in particular by Yusuf I (1333-54) and his son Muhammad V (1354-59, 1362-1391). Out of six royal palaces, only two survive (the Comares palace and the Palace of the Lions). A summer palace called the Generalife (from the Arabic jannat al-arif, ‘the garden of the architect’) is also extant. – SK