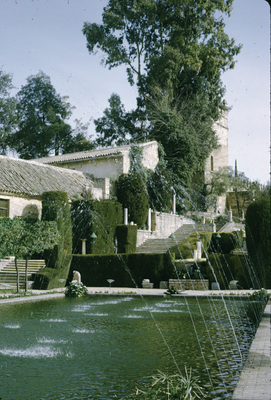 146- Islamic-style gardens at the Alcazar de los Reyes Cristianos (Alcazar of the Christian Kings). The word Alcazar comes from the Arabic ‘al-qasr’ meaning palace. The building of the Alcazar as it stands today was built on the remains of its Islamic predecessor when in 1234 it became a residence for the Christian monarchs, being rebuilt completely by the Christian king Alfonso XI in 1326. Despite being of Christian construction, the building appears Islamic in its forms and styles. In 1482 the Alcazar began being used as a tribunal for the Spanish Inquisition—this continued for the next three centuries until 1812, when this court was abolished by the government. From 1822 to 1921 the castle was used as a prison, and as an army headquarters till 1955. It was then given to town council, which finally deemed it as a historically significant site.