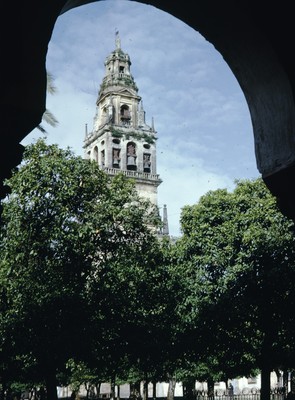 111- A view of the ‘Alminar’ (from the Arabic minar) at the Great Mosque or Mezquita of Cordoba. The mosque was begun and completed in the last quarter of the eighth century AD, by the first ruler of Islamic Spain, ‘Abd al-Rahman I. However, there were major additions by subsequent caliphs, including perhaps the most important ones by al-Hakam II. This cathedral bell tower was originally a minaret added in 951-952 by ‘Abd al –Rahman. This minaret was one of the first structures to proclaim the minar as a potent symbol of the presence and power of Islam. - SK