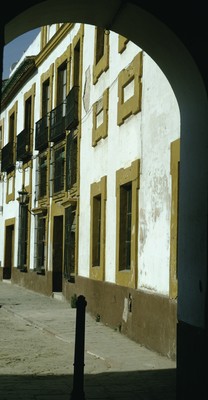 101- The Patio de Banderas in the streets of the Juderia, or the Jewish quarter of Seville. The Juderia, known today as the Santa Cruz, is one of the top tourist destinations in Seville. Jews and Muslims maintained a peaceful co-existence under Muslim rule, where Jews and Christians had privileged status as “People of the Book.” However, when Ferdinand III of Castile conquered the city from Muslim rule, he moved the Jews to the Juderia, and after the Alhambra decree of 1492, the Jews were expelled from Spain. -SK