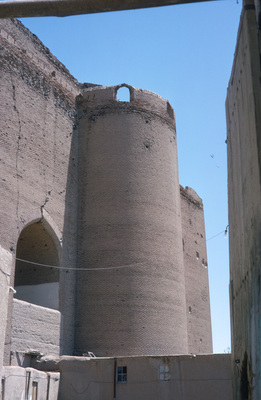 An exterior view of the brick walls of the Friday Mosque of Ali Shah, more popularly known as the “Arg” or fortress. Ali Shah was a vizier of Uljeytu and an avid patron of architecture, being responsible for the magnificent tomb of Uljeytu as well. Work on the Arg began in 1312 and ended in 1322. The mosque is most notable for its grand scale, typical of the Mongols: it is one of the most massive brick structures still partially standing. About this building Robert Byron writes: “the Ark, or Citadel, a mountain of small russet bricks laid with consummate art, which looks as if it had once been a mosque, and if so, one of the biggest ever built.”