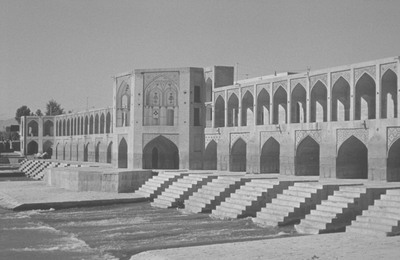 One of the most attractive bridges in Isfahan, the Khwaju bridge was built in the middle of the seventeenth century by Shah Abbas II and thus belongs to the Safavid period. This view shows a flight of stairs going down into the river pierced by gaps: the Khwaju bridge was not only a bridge but also a dam, and the gaps in the staircases house the sluice gates. One of the six pavilions are seen here, which relieve the monotony of the arches. Traditionally, Safavid bridges also served as a meeting place and a pleasant spot for relaxation. The king himself is believed to have admired the scene from the middle pavilion seen here. The Dutch traveler and artist (d. 1727) wrote that “In the evening you see an infinite number of persons of both sexes taking the air by the riverside, near the waterfall, and in the fine way that runs along the arches of the bridge, some on horseback, some on foot, smoking and drinking coffee, which they find ready prepared for them.” - Shariq Khan