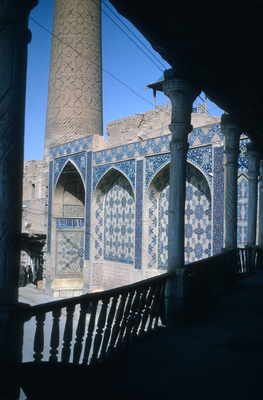 Isfahan was at one time dotted with these minarets. One of the earlier surviving ones is the minaret of the Masjid-i-Ali, seen in this picture. The minaret and mosque were both built in the time of the Seljuk Sultan Sanjar in the middle of the twelfth century. The mosque was later rebuilt and redecorated during Safavid times but the minar stands in its original form and decoration (foreground of the picture). - SK