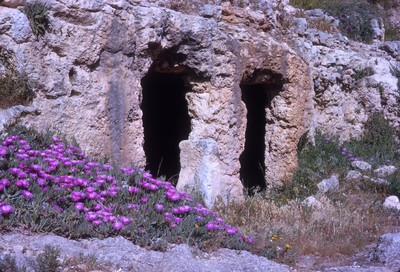 Rock-cut tomb at Cyrene. "Cyrene, which had at its peak a population of three hundred thousand, needed a place to bury its dead. Its necropoleis, spreading to the cardinal points of the compass, are the most extensive known in any Greek city. Archaeologists have catalogued 1,360 tombs, and many more were rifled in antiquity or remain unexplored. They cover twenty square kilometers, and are arranged along regular streets of the dead ... Some rombs are rock-cut; in others sarcophagi were placed about a flowered court. Many of the sarcophagi have a horizontal setting left in the pitched roof to hold a curious kind of faceless statue ... carved from the waist up, as though issuing from the earth" (MacKendrick, 117-8). (Source: MacKendrick, Paul. The North African Stones Speak. Chapel Hill: The University of North Carolina Press, 1980.)