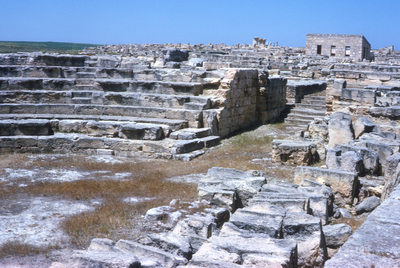 A section of the one of the four theater buildings at Cyrene. "Death, the Emperor Augustus thought, ended life's drama. Cyrenaicans in life had no lack of buildings for drama: no fewer than four theaters. The oldest, perhaps in its earliest phase from a little after 500 B.C., lies two hundred meters west of the Apollonion, from which it was separated in Severan times by the Wall of Nicodamos, as a kind of cordon sanitaire. The Romans, who preferred a good beast-fight to a tragedy of Aeschylus, transformed the Greek theater into an amphitheater ... It was rock-cut, with cages not under the arena as usual, but built more cheaply around the edge, from which the beasts could be released through a choice of ten doors. Also Severan is the theater south of the Roman forum, where perhaps the local assembly met ... A third theater building, the odeon, west of the Roman forum, is Trajanic; it was perhaps used for meetings of the whole Pentapolis—the group of five Cyrenacian cities of which Cyrene was at one time the head. The fourth, or market theater, two hundred meters northwester, is the latest; it dates from after the earthquake of A.D. 365" (MacKendrick, 118-20). (Source: MacKendrick, Paul. The North African Stones Speak. Chapel Hill: The University of North Carolina Press, 1980.)