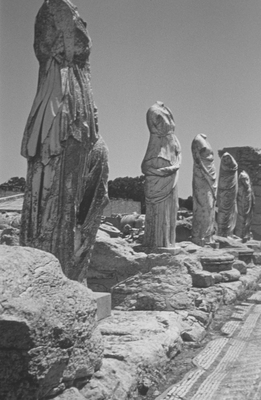 Remains of the statues of the nine Muses at the palatial House of Jason Magnus, situated south of the Stoa of Herms and usually dated to Commodus' reign (180-192). "The rich owner was eponymous priest of Apollo—that is, he gave his name to the year—and probably also gymnasiarch, in charge of public works. The complex covers two blocks, the western half with a mosaic-paved "Rhodian" (two-story) peristyle and a banqueting hall with statues of the nine Muses; also a receptio room with a mosaic of the Attic hero Theseus killing the Minotaur—half bull, half human—in the middle of the Cretan labyrinth. The peristyle capitals are carved to include tragic masks" (MacKendrick, 127). (Source: MacKendrick, Paul. The North African Stones Speak. Chapel Hill: The University of North Carolina Press, 1980.)