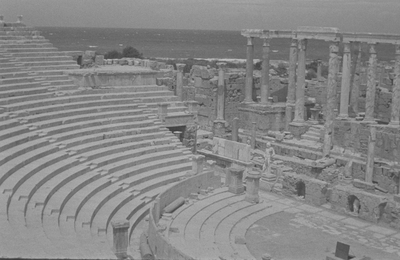 The theater of Leptis Magna. "Designed in the standard semicircular form used by the Romans, the orchestra and the lower rows of the cavea or seating area of the auditorium were excavated from the virgin rock of the site. The most important seating area at the front was separated from the rest of the seats by a low marble screen, while the lower half of the rest of the auditorium was divided into six radial sections by flights of steps running down from the five entrance installed halfway up the expanse of seats ... The stage was probably made of wooden sections resting in front upon a stone wall ornamented with niches displaying a variety of classical statues ... This was arranged in the form of three apses with a fine portico of columns, one row superimposed upon the other, following the contour of the wall ... To the sides of the stage retiring rooms were provided and, on the southeast, a room or court over the entrance to which was placed the inscription identifying the donor of the Theatre as Annobal Rufus ... Behind the stage a portico was arranged around an irregularly shaped court in which stood a temple dedicated to the deified emperors. This certainly must have been connected with the Theatre, since it was the classical tradition to have such a portico for the protection of patrons in inclement weather or for little promenades between theatrical presentations" (Matthews, 35-6). (Source: Matthews, Kenneth D. Cities in the Sand: Leptis Magna and Sabratah in Roman Africa. Philadelphia, University of Pennsylvania Press, 1957.)