B04.066 Leptis Magna - Temple of Rome and Augustus 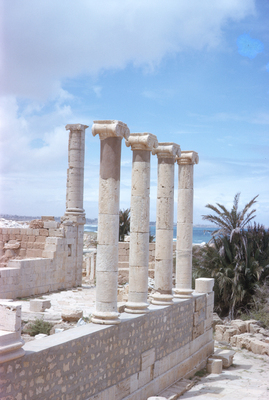 Columns with Ionic capitals in the "the two-celled temple of Rome and Augustus." The temple adjoined "the temple of Liber Pater on the east." "Attached to the front of its high podium was a speakers' rostrum. An inscription in neo-Punic from over the cella door records that the temple was completed while Babylon and Bodmelqart were suffetes (note the Punic names and the Punic term for the highest municipal office), and that it held statues of Roma, Augustus, Tiberius, Livia, and other Julio-Claudians. These statues, in whole or in part, were found near the temple, and a very impressive array they make in the Tripoli Museum" (147). MacKendrick goes on to say that these statues altogether comprise a set which is "the richest and best preserved of its kind in existence, and an important document for ruler cult as an instrument of Romanization in North Africa very early in the empire" (148). (Source: MacKendrick, Paul. The North African Stones Speak. Chapel Hill: The University of North Carolina Press, 1980.)