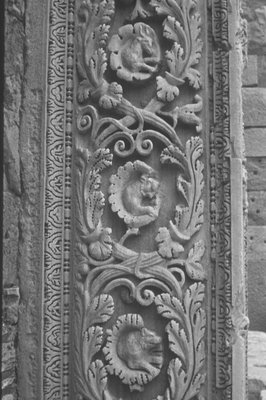 A section of the "most ornate pilaster" affixed to the walls in the Basilica of Leptis Magna. "The large Basilica at the northeast end of the Forum, measuring 290 by 120 feet, stood with its long axis running northwest to southeast. The interior was divided into a central nave and two side aisles by two rows of red granite Corinthian columns which supported upper galleries. Each end of the nave ended in a great apse decorated with columns and having a raised floor for the seats of officials ... At each end of the side colonnades, both ground floor and gallery, a most ornate pilaster was affixed to the wall [see next two slides] ... Those on the main floor were carved with medallion-scrolls of acanthus interspersed with human, animal and flower forms, while the four pilasters from the upper galleries bore ornamentations portraying the stories of Liber Pater and Hercules, th two patron deities of Lepcis Magna" (Matthews, 44). (Source: Matthews, Kenneth D. Cities in the Sand: Leptis Magna and Sabratah in Roman Africa. Philadelphia, University of Pennsylvania Press, 1957.)