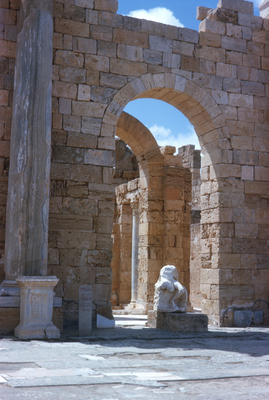 The arched entrance to the frigidarium in the Hadrianic baths of Leptis Magna. These baths "were among the largest in the Roman world, covering about half the area of Rome's Baths of Caracalla, and, like the Antonine Baths at Carthage, they were axially symmetical, perhaps for the same reason: aesthetics, and bathing for both sexes" (MacKendrick, 156). They were "finally dedicated and opened to the public in 127. With its main facade facing north, the Bath was comprised of a number of rooms arranged symmetrically along its north-south axis. The Roman bather entered from the north and immediately found himself in a large hall containing a swimming pool, or natatio, about ninety feet long and forty-eight feet wide, with a depth of about five and a half feet ... the large frigidarium, or cold room, [was] sixty feet by about forty-nine feet in size, with a ceiling covered by cross-vaults in three sections carried by eight Corinthian columns having a height of about twenty feet. The entire hall was ornamented with marble walls and finely carved statues" (Matthews, 40). (Sources: MacKendrick, Paul. The North African Stones Speak. Chapel Hill: The University of North Carolina Press, 1980; Matthews, Kenneth D. Cities in the Sand: Leptis Magna and Sabratah in Roman Africa. Philadelphia, University of Pennsylvania Press, 1957.)