B04.041 Justinian Basilica at Sabratha 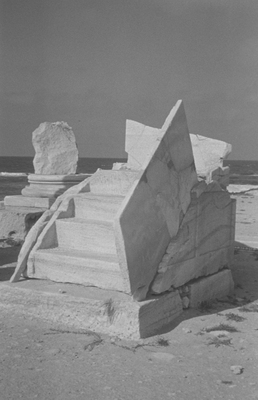 "Perhaps the best known Christian basilica in Sabratha is that built by order of the emperor Justinian and mentioned in the works of his courtier Procopius [a section from which may be seen here]. This stood to the northwest of the Curia and the Forum. For its construction the builders drew upon ruins of pagan temples and early imperial monuments, some of which now stood outside the limits of the Byzantine city wall, built during the sixth century to protect the much-shrunken town of Sabratha. Of the usual basilica design, with nave and side aisles running along a northeast-southwest axis, the Justinianic Basilica had an external porch in front of the principal entrance at the southwest. In all probability there was an apse at the northeastern end of the interior as well as a pulpit, a canopied altar, and marble altar table" (Matthews, 5). (Source: Matthews, Kenneth D., and Alfred W. Cook. Cities in the sand: Leptis Magna and Sabratha in Roman Africa. Philadelphia: Univ. of Pennsylvania Press, 1957.)