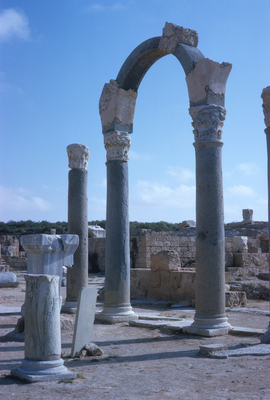 A close look at the archway of the fourth-century Curia. The Curia "was erected in the fourth century to house the official meetings of the city magistrates. At least some work was done on the atrium of the Curia in the latter part of the century, as is clear from an inscription dedicated to Lucius Aemilius Quintus fil—for his efforts on behalf of the province, probably during the ravages of the middle of the century. The Curia itself is rectangular in form, with four broad steps rising from the center to the side walls on the northwest and southeast. These also run across the end of the room at the southwest. The city officials sat on seats placed upon these steps which, along with the walls, were ornamented with re-used marble from other structures. Pilaster decorated the side walls, while fully detached columns were ranged along the main southwest wall. Both pilasters and columns stood upon a projecting base which ran around the walls of the room. The atrium or entrance hall to the Curia was located at the northeast end and was entered from the street by a doorway in its southwestern wall. Opposite this entrance a large niche contained an apse formed in the northwest wall, and the entire atrium was provided with an interior colonnade of Corinthian columns as well as a rather coarse mosaic floor" (52-3). (Source: Matthews, Kenneth D., and Alfred W. Cook. Cities in the sand: Leptis Magna and Sabratha in Roman Africa. Philadelphia: Univ. of Pennsylvania Press, 1957.)