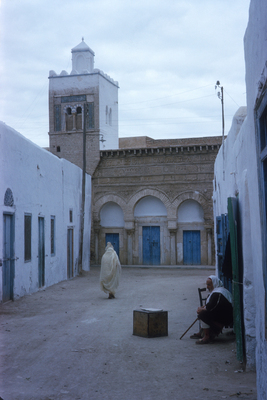 The facade of the Mosque of Three Doors, built in 866 by Muhammad Ibn Khayrun. "The Ibn Khayrun or Mosque of the Three Doors has the oldest sculpted and decorated façade in Islamic art and includes the whole Kairouanese decorative repertoire of the Aghlabid period. The use of soft, sculpted stone over the entire surface creates a truly magnificent effect. The façade is based on a symmetrical panel of three horseshoe arches of dressed stone supported by columns and capitals reclaimed from antiquity. The central arch is larger than the other two. The spandrels are decorated with lively vine-leaf scrolls similar to those painted on the half-dome of the mihrab in the Great Mosque. Above these are four string-courses of rectangular stones. The lower course has a kufic inscription that testifies to the fact that the mosque was restored during the Hafsid period. There are two further courses of calligraphy divided by a course containing a floral frieze. The kufic writing is in relief and the uprights of the letters are chamfered. The decorator has added small plant motifs to fill the spaces, pre-empting the floral kufic style of the late AH 4th century (AD 10th). The inscription contains several verses from the Qur'an and names the founder and the foundation date. The central string-course is decorated with a variety of carved stone squares, using designs taken from the Aghlabid repertoire. They include eight-branched rosettes with five-lobed palm motifs or with semi-florets, star-shaped flowers with eight petals and alignments of stylised, open or closed flowers. The top of this harmonious façade is finished with a cornice of stone corbels which are very similar to those found at the Great Mosque. At the corner of the mosque rises a minaret added during the Hafsid period. It has a rectangular base, in the Kairouanese manner, and the gemel windows are framed with ceramic tiles, betraying the influence of al-Andalus. The mosque itself is small. There are three naves parallel to the qibla wall. Each of the two columns supporting the ceiling is surmounted by semi-circular horseshoe arches." (Source: Saloua Zangar. "Mosque of the Three Doors" in Discover Islamic Art, Museum With No Frontiers, 2018. 2018. http://www.discoverislamicart.org/database_item.php?id=monument;isl;tn;mon01;26;en)