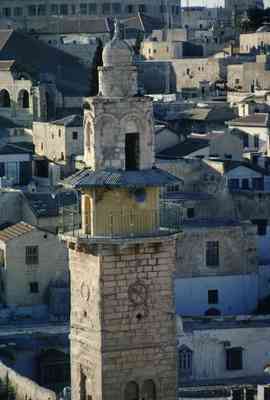 100- The minaret to the Mosque of Umar, directly opposite the Church of the Holy Sepulcher, west of the Bab al-Silsila. The mosque is said to commemorate the Caliph Umar’s prayer when he entered Jerusalem. The mosque was built by Saladin’s son Afdal Ali in 1193, and the minaret was given its present form sometime before 1465.