Following the assassination of Abraham Lincoln in in 1865, American citizens mourned the loss of their great leader. Artists, such as portrait painter and etcher Stephen James Ferris, memorialized the image of the sixteenth president of the United States through the production of popular prints after his passing. In this photo reproduction of an albumen print, Ferris depicts Lincoln ascending into heaven where George Washington meets him in an embrace. Basked in heavenly light, Washington places a laurel wreath upon Lincoln’s head as angels descend from sky to greet him. Referred to as an Apotheosis, this image imbues Lincoln’s death with associations of divine glorification. George Washington, seen as the founder of this nation, also held religious symbolism in the eyes of the American people; popular art and literature framed him as a “God the Father” figure after his death in 1799. Analogies were then made between Lincoln and Jesus, martyrs and saviors, as well as Washington and God, fathers and founders. The religious associations placed upon these political figures emphasized the significance of their deaths and provided a familiar narrative to cope with the grief that was felt after their passing. Comforted by this idea, the American people believed their beloved leaders could exist indefinitely as divinities in a second life.

In 1865, Washington and Lincoln (Apotheosis) made its way into the hands of the American public. Reproduced into postcards and printed in papers and magazines, the image was a tangible keepsake for those in mourning. The photo had commercial value; like other popular, period, print pieces of the time, their mass circulation was frequent and abundant due to constant conversation of political upset. Aside from reassuring Americans of their lost leaders’ greatness through transcendent imagery, the image had deeper emotional value as this Apotheosis also served as a reminder of the inevitable casualties of war.

Ferris’s career was based heavily in portrait paintings and engravings. First and foremost a collector, however, much of his inspiration was drawn from his collection of original and reproductive prints by artists such as Jean-Léon Gérôme, Jacquemart, and Rembrandt. Ferris produced hundreds of portraits, was a founding member of the Philadelphia Society of Etchers, and shared his knowledge of portrait etchings and prints as an instructor at the Philadelphia School of Design for Women. Washington and Lincoln (Apotheosis) exemplifies Ferris’s fascination with portraiture and printmaking of the time. Ferris most likely took inspiration from Gilbert Stuart’s George Washington and Matthew Brady’s Abraham Lincoln. In his collecting and artmaking, he experimented with popular print imagery and its accessibility.

The memorializing iconography of this print combined with the nature in which it has been shared and collected attests to its ability to preserve the memory of these two leading figures. Ferris’s inclination to commemorate individuals through the creation and collection of their images is representative of our human desire to honor leaders of the past. 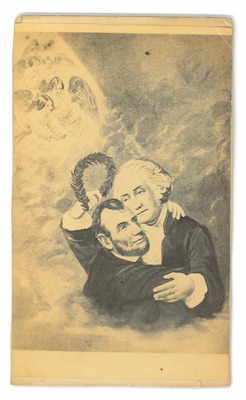