View of a Town on a River Bank

Giovanni Antonio Canal’s etching “View of a Town on a River Bank” depicts the maintenance of Venice’s empty Grand Canal. Canal, also known as Canaletto, was a Venetian painter and printmaker active from 1719 until his death in 1768. Canaletto’s etching is from a series from around 1740 depicting naturalistic and imagined landscapes that were relevant to his modest lifestyle in Venice, Italy. Most of Canal’s etchings and paintings are of Venetian subject matter. In this particular series he disregards the usual city views in order to etch less familiar perspectives of the Venetian canals. Although Venice was experiencing a revival in the arts in the 1700’s, its economic and political potential was gradually declining. The Grand Canal was a symbol of the once flourishing trade circuits that contributed to Venice’s economy. While Canal challenged the public with his jarringly honest depictions of the destitution of Venice, his contemporaries such as Francesco Guardi depicted Venice from a romanticized lense. The juxtaposition of the two artists depictions of Venice is representative of the way artists selectively portray a particular perspective through their work.

In the foreground, laborers are working to build a rickety bridge over the stream flowing adjacent to the canal. A Venice neighborhood is sitting across the river alluding to past progress and hindered industrial growth. In the background, a broken picket fence and crumbling stone wall lines the canal to contain the city’s limits. A wistful tree cuts diagonally through the composition breaking the solemn flow of the canal. Canal’s incisions are climactic and produce a buzzing texture that causes the city to possess a gritty quality. The canal in the middleground is mysteriously calm separating the activity in the foreground and background. The few figures in the foreground are struggling to maintain the structural integrity of the bridge being built. Canal contrasts the texture with painterly clouds that are finely etched to be large washes of light and shade. The small detail in light and shade and the slight swaying of the vegetation suggests stormy weather could be on the horizon.

During Canaletto’s lifetime, Venice’s political authority was quickly transforming into a defiant republic which significantly crippled the global trade appeal of Venice. All 33 of Canal’s etchings include naturalistic or imaginary representations of Venice that perhaps assuaged his political frustration. There is a languishing emotion for the meager prospects of economic growth and the denial of economic decay. The tree appears to represent an honest sense of uncertainty for what the future holds for the ailing city. Moreover, Canal delivers a perspective of the labor intensive work that accompanied the famous Grand Canal humbling the viewer and challenging them to face an unrelenting reality of a city in decline.

Inscription under the etching reads, "A. Canal. f." 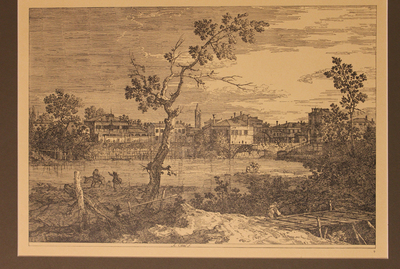