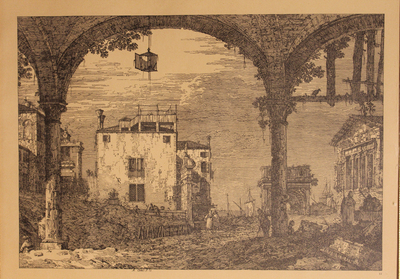 This etching was made by Giovanni Antonio Canal in 1744. Born in 1697, Canal grew up assisting his father with his work as a set painter. When visiting Rome in 1720, Canal began painting architectural views. From 1720 on, Canal, who took on the name Canaletto, worked as a painter, depicting mostly architecture and landscapes. Most of his revenue came from small topographical paintings of Venice, which he sold to tourists. The War of the Austrian Succession in 1941 dampened tourism in Venice, directly affecting artists like Canaletto. As a result, he began working with etchings, and created a book in 1744. Most of Canaletto’s buyers were not Venetian—in fact, few Venetians considered him a worthwhile artist.

Etchings, a process involving the burning of metal using an acid, have been around since the Middle Ages. Once a design has been etched into the surface of the metal, the plate is then covered in ink and can be printed. This allows for multiples of the same image to be made easily. Etching is often associated with more commercial ventures by artists because of their easily reproducible nature.

This etching depicts an architectural scene. The scene is framed by an arcade, or series of arches. The viewer’s vantage point is behind this arch, a choice that starkly places this image within the architectural genre. There are buildings that appear residential, a grand building with several columns, as well as a triumphal arch in the background. All of the architectural structures in this image are rooted in classical architecture. The arches implement a strict geometry over the scene with much attention paid to perspective and depth. The façade of the building in the back left is also classical in appearance. Images such as this celebrate and monumentalize architecture and the classical ideals by which they were built.

Though these buildings appear strong and fortuitous, there is a hint of the natural world encroaching: all of the buildings show ivy growing on the structures. These beginnings of decay and disrepair speak to the idea of entropy that is present within all architectural images: nothing can remain stark and untouched. Without repair, these structures will crumble, but this image will live on, monumentalized and unchanging.