In a gem-like body of fossilized tree resin, a fly and a spider are suspended. The two inclusions are fixed on opposing ends of the tiny organic jewel. The fly, as if in mid-flight, is frozen just below the center of the piece. The spider, so small it is nearly indiscernible, lies in the top left corner. An estimated 50 million years ago, a golden, organic deposit known as Baltic amber captured these two insects just as they are seen now.

Amber is the resin that once flowed from ancient and now extinct trees that have since then been fossilized. Baltic amber, specifically, comes from forests of resin-producing trees that once covered the coastal regions of the Baltic sea. Accordingly, the vast majority of Baltic amber deposits are now discovered in Lithuania, Latvia, and Scandinavia. These pieces of tree resin are dated from the Mesozoic era (248–65 million years ago) and the Cenozoic era (65–1.8 million years ago). Living, resin-producing plants and trees (usually conifers) would excrete the semi-solid from special ducts in order to protect themselves from disease, infestation, or extreme weather. During this process, insects and bits of plant-life would get stuck in the globules of resin. Over an extended period of time, the resin would stabilize and solidify into an organic plastic, thus fossilizing whatever had been encapsulated. In their abundance, amber inclusions have given an enormous insight into Earth’s vast historic biodiversity. The fly that is captured in this particular bit of Baltic amber is one of the most frequently discovered inclusions. Thousands of members of the order Diptera (“True Flies”) lived amongst the fungal growth of amber tree forests and were often picked up by the dripping resin.

Apart from providing insightful biological information, amber has long been of aesthetic, spiritual, and symbolic value. Different cultures across the globe have been collecting and fashioning the substance since the Mesolithic period (roughly 8,000 years ago). Elaborate pendants, carvings, beads, and sculptures have been discovered across the globe. Many cultures may have also valued the substance as a means of spiritual protection from harm or disease. Ancient Greeks, Romans, Celts, and Lithuanians shared the common mythical concept that amber was the “tears of gods.” Today, amber continues to be a commodity. There is a market for raw amber, jewelry, and decorative objects, all of which predominantly come from Europe.

The golden, jewel-like substance has fascinated both artists and scientists alike. Warm, transparent, and lustrous, it frames pieces of Earth’s biological past in an inherently beautiful way. Inclusions like these insects provide the smallest glimpse of life from millions of years ago. Collecting both unfinished specimens and carefully crafted artifacts allows humans to experience the effects of the natural past through multiple cultural perspectives throughout the ages. 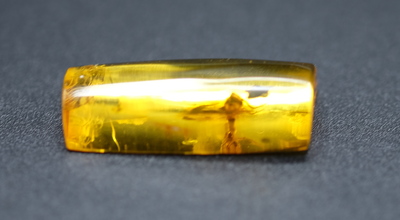