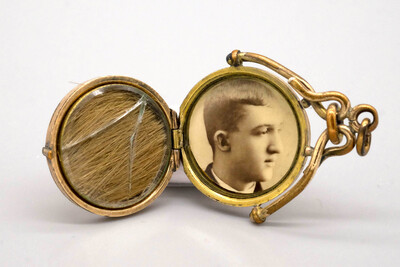 After the death of Prince Albert in 1861, mourning lockets and jewelry became central to Victorian grieving practices. Queen Victoria wore black clothing and mourning jewelry in response to her husband’s passing for decades. Her status popularized the fashion and inspired others. Jewelry in general was worn to show class and wealth, however, mourning jewelry was a personal item that transcended class boundaries. One would wear it underneath their clothes to feel closer to the person that they lost. A mourning locket is a type of memento mori, meant to keep the memory of a loved one present. This lead to more and more people wearing mourning jewelry.

This locket is divided into two sections, on the left side is a lock of the loved one’s hair and on the right, a photograph of him. The glass protecting the hair is cracked but still holds it in place. The photograph of the man is a profile shot, presumably taken when he was still alive. The locket is connected to the remnants of a chain. Behind the compartment that holds the hair is an engraving of a farm, or pasture and a flower. While on the other side has the initials “HJ” inscribed, most likely the initials of the person that the locket is memorializing. Human hair was a common addition to Victorian era jewelry. Often, whole necklaces of human hair were braided to remember a loved one. With hair, multiple family members could have locks, and would be gifted rings and other items that could preserve their memory. Although this locket has a photograph, not everyone could afford to have their pictures taken or painted. Human hair, in contrast, was an inexpensive way to remember someone. In America, mourning jewelry became common due to the Civil War. Soldiers would cut a lock of hair before they left for combat to prepare in the event of their death. Family members would save these ringlets and incorporate it into mourning jewelry of their own.