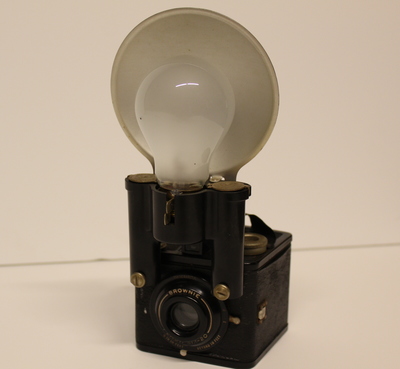 The Brownie Flash Six-20 camera was introduced by the Eastman Kodak company in 1946, revolutionizing the way people began taking photographs in the turn of the century. Before the twentieth century, photography an elitist pastime and seen solely as a way to document important figures and events. Photographs capturing mundane moments from daily life were incredibly rare, for they were costly and took a long time to mass produce. In the early twentieth century photography underwent an extraordinary change with the introduction of the more compact Brownie cameras, transforming the perception of the medium.

In contrast to their predecessors, the Brownies targeted different demographics. Their relatively-small shape, accessible film, and low cost appealed to the middle-class and artists who established the process of photography we know today. Kodak even marketed the Brownie as an effortless camera that could be used by any level photographer as well as any member of the family. Their slogan “You press the button, we do the rest,” attracted artists and amateurs alike, seeking to advance and promote this new artistic medium. The camera was also used by professionals in various fields, like scientists who could now hold objective evidence documenting people and places. Prominent photographers like Eadweard Muybridge used the Brownie to record the stages of movement far too rapid for the human eye to observe in his motion series.

In the arts, the photographic medium inspired new stylistic trends only manageable through photos. Artists sought to capture social and cultural changes, industrialization, and political movements through this medium. In particular, Cubists, Dadaists and Futurists, took advantage of the reproductive purpose of photography to challenge boundaries of traditional art by making photomontages, installations, and collages appealing to the newer generations. More precisely, the Brownie had the most advanced features of the time, including an optical direct vision finder, a built-in close-up lens, a timer, and an attachable flash unit.

In order to remember a certain period in our lives we take pictures. By having this tangible still-shot of a moment in time we chose to preserve a memory that cannot be recreated. Humans have an obsession with holding onto nostalgic moments through photographs and possessing this tangible piece for our personal memories. Change occurs so suddenly in the twenty-first century that a simple photograph can transport us back to a previous time we hold a deeper connection to.