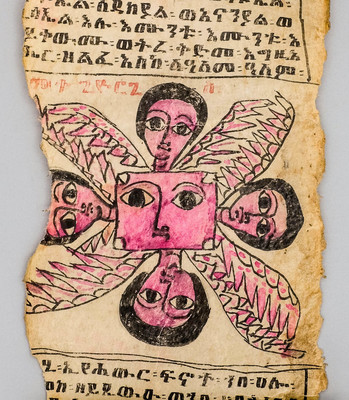 Purchased by David P. Harris possibly from Maria Teresa O’Leary (Nuevo Mundo) in Alexandria, Virginia on February 28, 1976. According to the receipt, Harris acquired an antique scroll of Ethiopian origin on February 28th, 1976. It is unclear if this receipt entry is in reference to this “Healing Scroll” (2020.209) or the “Fragment of a Parchment Scroll” (2020.208). Business partners Maria Teresa Eneim O’Leary (1930-2015) and Cornelia Noland founded Nuevo Mundo in 1966. O’Leary traveled extensively throughout Asia and Latin America and collected many of her artifacts during her travels. Harris made five known purchases at Nuevo Mundo between 1975 and 1980 and Nuevo Mundo closed in 2011. Unfortunately, there is no proper documentation to meet the standards set by AAM, AAMD, and the 1970 UNESCO Convention because there is no record of the scroll before the 1976 sales receipt. In fact, because we are not even certain that the receipt is referencing the “Healing Scroll” (Object 2020.209), there is no legitimate record relating to the scroll’s provenance. There are no bilateral agreements between the United States and Ethiopia, the scroll’s country of origin, through the Convention on Cultural Property Implementation Act (CPIA). Ethiopia has one cultural property law that pre-dates the 1970 UNESCO Convention called “Proclamation N.229 of 1966 to provide for the protection and preservation of antiquities.” In simplest terms, Proclamation N.229 asserts that all antiquities existing within Ethiopia as of 1966 are property of the State. Proclamation N.229 was ultimately repealed in Proclamation N.36 of 1989: “a proclamation to provide for the study and protection of antiquities.”

There are portions of the parchment missing from the scroll at the top and on the left and right sides. The left side of the scroll has more substantial loss to the point where some of the writing is missing. There is also general wear along the edges from rolling and unrolling the scroll. Some of the pink ink used in the illustrations and in some of the words has worn away and is now very faint. The writing is in black and red ink but there are some places where the red ink has become a light pink color. Additionally, there is some staining throughout different parts of the parchment. September 2022. - Samantha Goldenson ('23)

A portion is missing from the upper edge of the scroll; remnants of the pink ink used on the missing illustration(s) are visible. The upper edge also has a series of pinpricks, with a row of spun thread still attached. There is extensive damage to the left side of the scroll — and less severe damage to the right — likely a result of wear and tear as the scroll was rolled closed for daily use. September 2020. - Caitlin Mims

This healing scroll is a parchment scroll that when unrolled, reveals extensive text and images. The scroll consists of three separate pieces of parchment that are stitched together. The healing scroll was likely created for a woman and was meant to enhance her fertility and protect her children. The text invokes the name of “the Father, Son, and Holy Spirit, one God” and includes many other prayers in order to safeguard the woman and her unborn child from demonic forces. The scroll’s two images also have an amuletic function. The pink and black figures at the middle and lower parts of the scroll are talismans, which provide further protection of the woman and her child.

This scroll is similar to many other healing scrolls used in Ethiopian culture. Traditionally, the healing scroll is created by “däbtära,” community clerics who tailor the message of the scroll to the specific needs of the client. The process to create a healing scroll is incredibly personal and symbolic. First, an animal, that is selected through astrological reasoning, is sacrificed. The client is then bathed in the blood of the animal for the sake of purification and the animal’s skin is then used for the parchment of the scroll. The parchment is then stitched together to create a long sheet that is the same height as the client. The scroll is then filled with prayers and images that are most relevant to the client’s needs and provide the most protection. Typically, healing scrolls were associated with fertility, however, they could be used to help heal any sickness. The scroll can be worn around the neck of an individual and can be stored away when they are healed.

This parchment scroll was created for a woman, either to enhance her fertility or offer protection for herself and her unborn child. The scroll’s prophylactic function is created by the specific combination of texts and images inscribed on it.

The text begins with an opening standard in Ethiopian protective scrolls, “In the name of the Father, Son, and Holy Spirit, one God,” and then details the object’s purpose: to capture demons and protect the mother and fetus from their threats.Several prayers for protection against the Evil Eye and a historiola — a type of spell which describes a mythical or religious narrative in order to provide a precedent for the spell’s request — are also included on this scroll.The historiola describes the story of Sissinios, an Orthodox saint who killed his sister when she was possessed by a demoness and attempted to murder her own children.

The scroll is comprised of three sheets of parchment stitched together with parchment thongs.The uppermost edge of the scroll is torn and contains traces of a pink ink, suggesting an image was originally at the top opening of the scroll.

The rest of the scroll is filled with single-columned lines of Gəʿəz text and two talismanic images, one near the center of the scroll and the other at the lower edge. Both images are executed in pink and black pigments.

These images do not illustrate the text, but rather are talismans that supplement the scroll’s protective function. The central image depicts the heads of four angels, each projecting from a side of a central rectangle. The angels are outlined in black and painted pink. Each features a set of large eyes which gaze out at the viewer; the facial features are indicated by black lines. A set of two pink wings, also outlined in black, surrounds each angel’s head. The central rectangle is filled with a wash of pink ink and features a face, similar to that of the angels, with large eyes and eyebrows, as well as a nose and mouth.

The lower edge features a cruciform design. At the center is a pink rectangle with a similar face: large eyes and features that are delineated by black lines. The cross is made of two intersecting arms of equal length, each outlined in black (exterior) and pink (interior) lines. The terminals of each arm curl away from each other. Each arm has a decorated central strip, composed of pink and black wavy lines ending in a terminal conical shape, in which there is a single tear-drop design. Four double-armed crosses, each made of a single black line, extend from the junction of the cross-arms.

Both of the extant images on this scroll are variants of an image commonly found on healing scrolls: magical geometric designs.These designs are intended to trap demons, sealing them inside the scroll. They are said to derive from the seal of King Solomon, which was revealed to him by God and used to command and trap demons. Together, the designs supplement the healing power of the text, in order to confront and trap demons.Similar motifs can be seen on healing scrolls in the collections of the Bodleian Library (MS Aeth. f. 4 and MS Aeth. f. 10) and the Menil Collection (CA 64051.02).

The oldest surviving Ethiopian healing scroll dates to the early sixteenth century, but they are believed to have been first produced in the Aksumite period (ca. 80 BCE – ca. 940 CE). The scrolls are produced by däbtära — itinerant, unordained clerics.A däbtära was traditionally a teacher and scribe until the education reforms of Ḫaylä Śəllase I in the early twentieth century.Today, they serve as singers and musicians in the church and as healers outside the church.

Each scroll is tailored to the needs of a specific client, and is created according to a standard ritual. The process begins with the selection and sacrifice of an astrologically determined animal. The client is then purified by being washed with the animal’s blood. The animal’s skin is then used to produce the parchment for the scroll. Healing scrolls typically consist of three strips of parchment, stitched together to create a scroll equal in height to the client. This ensures the client is protected from head to toe.The scrolls are then inscribed with the owner’s name and a collection of texts and designs that together provide its protective role. While the majority of extant scrolls were created for women, to aid in conception and pregnancy, they can be produced to counteract any ailment. The däbtära selects appropriate prayers and protective spells and inscribes them in black ink on the scroll. The baptismal name of the client, incipit phrases of prayers, and important words from scripture are then inscribed in red ink.These scrolls can then be worn by the client in a cylindrical case or hung from the walls of their home until they have served their purpose.Once the client is healed, the scroll can be stored in case the ailment returns.