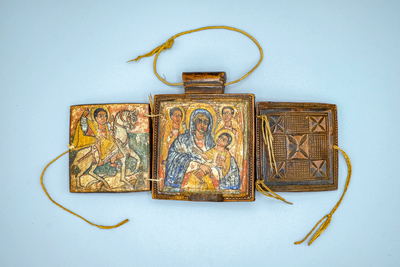 Purchased by David P. Harris from Xanadu Gallery in San Francisco on April 26, 1991. Harris acquired this icon 12 years after the gallery’s opening. A dealer by the initials “JC'' sold the piece, but after getting in contact with the current owner of the gallery there are no details on whose initials these are, and all records before 2000 no longer exist due to change in ownership. Given the widely acknowledged standard that “Archaeological and other cultural objects that meet this standard are documented as having been removed from their country of origin before 1970 or legally exported after 1970,” it is unknown whether this piece lies under this common ethical guideline. It is known that the gallery cannot have come into possession of this object before 1979, but there is no proof that it was illegally or legally exported from its country of modern discovery. It may be possible that there was another middleman involved that obtained this pendant before 1970, or that it was exported from the country legally, but there is no evidence to point in one direction or the other, as the paper trail ends at Xanadu.

Chip in wood on the inside of Side 1 above and below the image of Mary; wood chipped on side 2 on the right upper corner; paint wear on all panels; excessive chipping of the paint on side 2; panel with two saints exhibits chipping on the edges and on the left figure; panel with Abba Gäbrä Mänfäs Qəddus has paint chipping on edges. September 2022. - Emma Kang ('25)

There is extensive wear on the painted panels. The wood frame below the Virgin and Child has a chip. September 2020. - Sonia Dixon

This multifaceted wooden icon is a pendant to be draped around one’s neck, and used for personal worship. The front side of this pendant’s exterior displays an intricately carved design: a cross with trefoil finials at the center, framed by a diamond, and x’s or crosses with flared arms at the corners, enclosed within a border of lines and small, triangular designs. This carved panel serves as a door that is connected to the main panel by string hinges. This door protects delicate imagery within; once opened, an image of the Theotokos is revealed, framed in the central console. The Virgin Mary is covered in a blue maphorion, a garment meant to cover the head and shoulders. Her left arm cradles the baby Jesus, while the left hand holds a yellow mappa, a kind of handkerchief. With a red booklet in the grasp of Christ’s left hand, his right index and middle finger reach out, extending in a sign of blessing to the holder. As protectorates, two angels, swords in hand, stand as safeguards of the scene. On the left hand panel, on the inside of the door, the patron saint of Ethiopia, Saint George, charges on horseback to the right, fighting a serpent under foot, a common image in Christian Ethiopian art (Dixon 2022, 158).

The other side of the pendant is also covered by a carved wooden panel. Its design is less intricate: a checkered pattern alternates between boxes of hatching and x’s, with a similar triangular border as seen on the front. Once this door is opened, an image of the saints Abba Täklä Haymanot, the founder of the monastery, Däbrä ʿAsbo, and Abba Ewosṭatewos, who formed a monastic community in Eritrea, is in view. The two are differentiated by their names inscribed on the lower halves of their cloaks; Täklä Haymanot’s white beard additionally identifies him as the “father of all monks” (Dixon 2022, 159). These saints are adorned by turbans, draped with yellow cloaks matching the shade of their halos. The inside of the door of the facing panel, Saint Gäbrä Mänfäs Qəddus is shown surrounded by lions in the wilderness. He is an ascetic covered in hair to protect him from the harsh conditions of nature. The harness around his chest represents the askema, a monastic scapular used for the mortification of the ascetic’s body (Mathiesen 2022, 120–121).

This object consists of a central panel and two wings. String attaches each wing to the central panel. The central panel is painted on both sides; the two side panels are only painted on the interior. Their exterior faces feature carved wood decoration and serve as covers to the paintings on the central panel when closed. A string attached to the outer edge of each cover allows the wings to be fastened. When opened, the wings provide stability and allow the object to stand on its own. The loop at the upper end indicates that this object could also be worn or suspended. The small size suggests that it served a personal, devotional purpose.

The exterior of the wing on side 1 is carved with a central, equal-armed cross with trefoil finials on the left, right, and upper arms, and a lozenge-shaped finial on the lower arm. The cross is enclosed within a beaded lozenge, and each corner of this panel features a framed-X motif.

The interior of this wing features a haloed figure on a white horse, set against a background created by three horizontal registers; from top to bottom they are red, green, and red. The equestrian wears a blue long-sleeved tunic beneath a red short-sleeved tunic. He wears a yellow and red patterned mantle and matching trousers. He raises his right arm and holds a lance or spear, now badly abraded. The horse tramples a limbless reptile. This iconography depicts Ethiopia’s patron saint, Saint George, on horseback killing a snake. Some depictions portray a dragon with wings and legs rather than a snake. Equestrian saints are popular talismanic images in Ethiopian religious art.

The painting on the central main panel, on side 1, shows four haloed figures (cat. 29C). The Virgin is in a frontal pose with both of her arms wrapped around the Christ Child; they are flanked by two angels holding spears. The Virgin wears a red gown under a blue maphorion. Her halo is highlighted by red rays, a feature that is distinct from the other haloes. She also grasps a ropelike object in her left hand — possibly a handkerchief, or mappa — and gives the blessing gesture with her right hand, extending her first two fingers. Christ gazes at his mother as he holds up his right arm and hand with the gesture of blessing while holding a red closed book in his left hand.

The pairing of the Virgin with Saint George is first associated with king Zärʾa Yaʿeqob (r. 1434–68). According to legend, they are said to have helped the king triumph in a battle against Sultan Aḥmad Badlāy (r. 1432–45), a Somali kingdom in the Horn of Africa, in 1445. Zärʾa Yaʿeqob subsequently mandated an increase in the veneration of Mary through the making of icons, the establishment of festivals in her honor, and the implementation of readings from the Miracles of Mary in every church service. The king encouraged the faithful to wear images of the Virgin on their chest. Icons of Mary became more prevalent after the rise of this Marian cult.

On side 2, the cover features a carved checkered pattern with nine square frames alternating between two designs: an X motif and cross-hatching. The X motif is common in Ethiopian art, and is interpreted as “doves’ eyes,” which are apotropaic in function.

When open, the wing features a figure standing against a background with three painted registers: (from top to bottom) red, green and red. The figure lifts both of his arms with his palms facing upward — the same direction as his gaze — and is flanked by two lions. His body is covered in hair and he wears an orange harness strapped across his chest and torso. He has long black hair, a white beard, and a halo. This is an image of the hermit saint Gäbrä Mänfäs Qəddus (fl. fifteenth century) — founder of the monasteries Däbrä Zəqwala and Mədrä Käbd, both southeast of Addis Abäba — identified by the Gəʿəz inscription in the upper left corner.

Gäbrä Mänfäs Qəddus lived as a hermit who refused to wear clothes due to his ascetism.According to legend, God covered his body with hair to protect him from cold weather — portrayed in the painting as black hatching.The orange harness that he wears may represent heavy chains for mortification, emphasizing his ascetic lifestyle.In the wild, Gäbrä Mänfäs Qəddus befriended and tamed animals and is often depicted with them.

The central panel on side 2 features two similarly dressed haloed saints in frontal pose standing against a green background with Gəʿəz inscriptions on the lower half of their bodies. On the left stands Abba Täklä Haymanot (ca. 1215–1313), founder of the monastery, Däbrä ʿAsbo, later renamed Däbrä Libanos in Šäwa in central Ethiopia. Abba Ewosṭatewos (ca. 1273–1352), who stands on the right, founded his own monastic community in modern Eritrea (Erətra).The two saints stare upward, holding hand crosses in their right hand, similar to the ones featured in this catalog.Both figures wear knotted white turbans with black and red stripes, yellow shawls with different patterns in red, and red tunics.Ewosṭatewos has a black beard and Täklä Haymanot has a white beard, a feature denoting him as “father of all monks.”

These two monastic leaders are usually depicted together.They are both recognized as being religious and political leaders. A legend credits Täklä Haymanot with helping king Yəkunno Amlak (r. 1270–85) overthrow the Zagwe dynasty and restore the Solomonic dynasty in 1270.Ewosṭatewos criticized emperor ʿAmdä Ṣəyon I (r. 1314–44) for his involvement with his father’s wife and encouraged a ruler from Ḥamasen, modern Eritrea, to rebel against the emperor.