Small black and white photograph of the Adrian Mausoleum, Rome. The description on the back of the card reads, "The Adrain Mausoleum is the only very ancient structure in Rome which seems to-day in good repair. It was built by the Emperor Hadrian, who occupied the imperial throne from the year 117 to the year 138. The only object of the building was for a sepulcher for himself. It is approached by a most beautiful bridge, called the Bridge of the Angel, which is adorned with numerous beautiful pieces of statuary. The Emperor was noted for his travels throughout his dominion which covered the known world, and his travels were everywhere marked by the erection of beautiful buildings..." 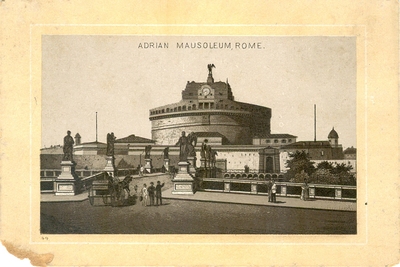