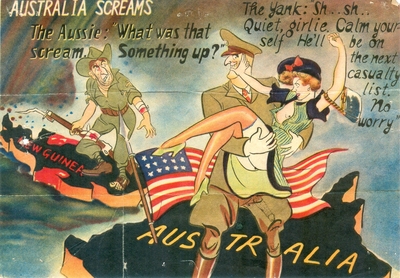 An important tactic throughout World War II was the usage of propaganda cartoons that were widely distributed -- many with the motive of sowing dissent and further degrading morale within respective groups. This colored print, titled Australia Screams, has no exact date associated with it, but through an analysis of the iconography, stylistic choices made, as well as the simultaneously occurring historical events, it can be inferred that this was most likely produced in the early 1940s. There is no signature on the print, but again through visual analysis it can be assumed that it was made by an enemy of the Allied Forces.

At the top left corner reads the title, “Australia Screams”. Below, a wounded and concerned Australian soldier is depicted standing on the country of New Guinea and is holding a rifle. The caption above him reads, “The Aussie: What was that scream? Something up?” Beside him is an American soldier, standing on the country of Australia, who looks back towards the Australian officer. This soldier is shown holding a woman who is clearly struggling to get out of his grasp. Her breasts are exposed and the text next to them reads, “The Yank: Sh.. sh.. Quiet, girlie. Calm yourself. He'll be on the next casualty list. No worry.” An American flag has been placed down next to them. There is nothing on the back side of the print, but the clear folds may indicate that this piece was folded up and possibly distributed from the air.

During the early 1940s, Australia, who at this time was a part of the Allied forces, played a large role in the Pacific Theater of war between the Allies and Japan. The situation in the Pacific Theater was worsening and there were constant threats of the Japanese invading Northern Australia.This caused widespread panic and incited drastic measures to be taken by Australian government to protect the country and its territories. One of these measures was the deployment of U.S. soldiers in Australia, which in the beginning was a welcomed and positive event. However, attitudes around this deployment quickly deteriorated, especially among Australian soldiers themselves who were being deployed around the Pacific while their American allies were at home with their women and families, being higher paid and receiving more benefits. The Battle of Brisbane, the result of escalating tensions, led to two nights of rioting between Australians and U.S. troops on November 26–27, 1942, including hundreds of casualties and one Australian death.

I argue that this print was made by enemy forces, specifically Japan, to further exploit and provoke tensions between American and Australian allies and in turn advance their own political agenda. The style of this cartoon is reminiscent of Japanese political propaganda of this time (cf. Sterling W. Schallert Collection, WVM Mss 104, https://wisvetsmuseum.com/blog/japanese_propaganda_wwii/). This is shown through the similarly depicted American figures, as they are all exaggerated with prominent features (ie. scrunched up faces, large and emphasized bodies and facial expressions, etc.). It is also shown through their common use of symbolism within propaganda art; the Australian soldier’s broken bayonet could be a metaphor for a flaccid penis, thus reflecting the loss of manhood and threat many Australians felt by American soldiers on the Australian homefront with complete access to wives and girlfriends while they were stationed overseas.

This piece must have been successful in evoking a specific type of anger between the Allies and in creating a disruption, as a penis is very clearly drawn onto the print on the American soldier. This was, again, to probably emphasize the sexual threat of Americans. While specifics of the piece are still unclear, this print was done with the purpose of swaying or influencing specific groups and was often effective in inciting anger, discontent, and more. Additional copies of this piece have been found in the USMC Archives (COLL/3541) and in the Duke University Libraries, Broadsides and Ephemera Collection (bdsja10001).