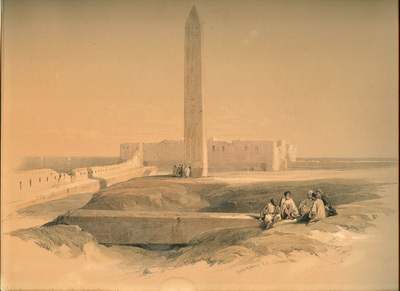 In this lithograph, David Roberts depicts the obelisks he saw at Alexandria. The obelisk in the foreground was taken by the British to London through a harrowing sea journey, where the crew had to abandon ship. Later, sailors found the ship, with the obelisk completely undamaged, and it was successfully brought to its intended home. The obelisk in the background was also removed, and is now located in Central Park. Professor Blick collected with a historian’s eye, and this image depicts a beautiful, unaltered moment in history. The scene displays the Middle East in a period of peace that existed before conquering empires altered the face of the landscape forever.