Barbarities Exercised by the Popish Persecutors and The Massacre of the Protestants in Piedmont.

This set of engravings are taken from an edition of Foxe's Book of Martyrs, and depicts the persecution of Protestants in Italy, likely utilized as anti-Catholic propaganda elsewhere in Europe. Many European nations tended to align themselves with one faith or another, though minority religious groups emerged throughout the continent. After the Reformation of the mid-16th century and the rise of Protestantism throughout many areas of Europe, sectarian violence became commonplace, and some governments instituted policies that intended to silence or even drive out certain religious populations. The top plate (Plate XXX) depicts the execution of Waldensians, a Protestant ascetic group that emerged in Northern Italy. The “Popish Prosecutors” (indicating they are Catholic) carrying out this torture are dressed in clothing that indicates they are government officials, and carry weapons and staffs that communicate their authority. The Waldensians, however, are nearly nude and depicted in solemn agony. Keeping track of martyrs and their experiences became a crucial part of religious culture in the 19th century, as exhibited through John Foxe’s 700-page tome documenting crimes against Protestants over the previous centuries. The events in Italy demonstrated in these engravings are included in this document, as well as various events elsewhere in Europe. In framing deaths of Protestants as “martyrdom,” Foxe is able to engage in a unique form of preservation. The memory of these deaths is preserved through the lens of sacrifice and loyalty to faith—remembered even centuries later.

The black-and-white engraving is richly detailed despite its small size—the woodcut-style inking depicts executions and torture in brutal detail, with bodies in the foreground and background contorted in nooses. In creating violent, striking images, worshippers are able to remember the sacrifices of followers before them, and use these images as inspiration for their own faith. In the bottom plate (Plate XXXI), a massacre of Protestants in the Piedmont region of Italy is depicted, using the same black-and-white engraving style. The woman at the left-hand side of the plate is posed like a crucified Jesus, evoking imagery of martyrdom to suit a specific agenda. The invocation of “Popish” in the caption of the first plate establishes these works as anti-Catholic, using a term that was typically an anti-Catholic slur in this period in Europe. These prints were likely distributed through pamphlets and other Protestant literature, energizing the masses to find strength in their faith despite oppression. 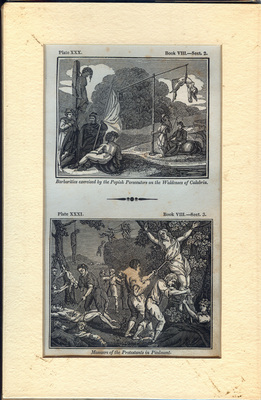